I just entered a presentation into slideshare’s “Tell A Story” contest. If you dig it, vote for it. Thanks!

Don’t forget the second step of the contest where you have to email some friends about the contest and cc me.  You’re not eligible to win the iPod unless you do both steps.  I’m getting a big kick out of the submissions so far.  Here’s one from Matt Barhorst  that about made me pee my pants laughing:

By the way, where did you get that shirt? That is the ugliest shirt I’ve ever seen. You look like you’re wearing a shirt that was destined for either the Beach Boys or Peter Brady.

So, maybe you’re dancing to Kokomo, or When It’s Time To Change (look up Peter’s rendition on Youtube)

And I guess, it’s time to change that shirt.

Here’s the video Matt is referring to: 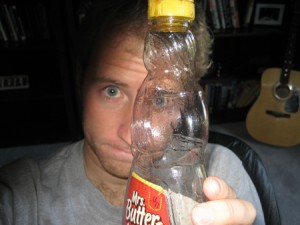 This video is based on true experiences (even the bra lady!) at book signings and book clubs.  If you have a book club, I would love to come visit it, especially if you’ll be discussing any or all of the following: strawberry pie, cheesecake, margaritas, beer, and (oh, yeah) my book.  I would prefer to come in person, but if the distance is too great, maybe I can be there virtually (Skype, chat, phone). Email me: kelsey@travelin-light.com

What it looks like to go undercover as an underwear buyer

When I was in Bangladesh trying to track down the factory that made my Jingle These Christmas Boxers, I reluctantly went undercover as an underwear buyer. I’ve never shared some of the photos I took from the experience, until now…

This video discusses why the heck I’m relaunching the site 6 months after the release of my book.  It also covers some of the new features, and most importantly discusses how you can win an iPod.

Plus, there’s a very special guest star — little Harper Willow Timmerman.  When I watched this video, I barely paid attention to what I was saying.  Instead I just stared at Harper.

Recently Author Barbara Ehrenreich revisited some of the people she wrote about in her book Nickel & Dimed to see how they were faring in the current economic climate. She writes about them in a recent Op-Ed in the NY Times:

The current recession is knocking the working poor down another notch — from low-wage employment and inadequate housing toward erratic employment and no housing at all.

the story of an incremental descent from excess to frugality, from ease to austerity. The super-rich give up their personal jets; the upper middle class cut back on private Pilates classes; the merely middle class forgo vacations and evenings at Applebee’s.

Yet the story of the poor getting poorer isn’t reported on. …

Read More >
3 comments
Tweet
@KelseyTimmerman
says:
Consumer assume the ethical/local/slow food movement has continued to grow, but many of the farmers have experience… https://t.co/Q32M9Ubh7H
13 hours ago | FOLLOW ME! | RETWEET