Where is Kelsey? (Final Clue & a special guest)

This is it, the last clue.

I’m joined by my brother Kyle who accompanied me to the country you need to guess.

After I give the clue (the country in question is where my T-shirt was made) Kyle shares with us what it’s like to contract malaria in _____ and come down with it in France.

And if you’re not sure where my T-shirt was made, all you have to do is read this sample from “Where Am I Wearing?” (PDF)  to find out.

Be a small part of microfinance

I lent $25 to a businesswoman who runs a food stand in Cambodia through Kiva.org.  At least I thought I did.

As it turns out, the money didn’t go directly to Mao Yan whose grown children work in garment factories.  Yesterday I learned this in a column by Ron Lieber in the NY Times:

KIVA When you sign up to be a lender at Kiva, your money does not go directly to the entrepreneurs whose requests appear on the Web site. Instead, a microfinance institution administers the actual loan.

Often, these Kiva partners engage in what a Kiva founder, Matt Flannery, refers to as “pre-disbursals.” In plain English, that means that borrowers get their loans before their appeals appear on Kiva’s… Wearing my favorite T-shirt in front of the factory (in the country you need to guess) that I write about in Part I of my book “Where Am I Wearing?” My wife hates my hair this long. Apparently so did the security guards at the factory.

Next Wednesday I’ll post the final video clue in which I’ll talk about my factory visit.

(Warning sponsor and self-pimpage!) Hey and if you’re looking for something to spend all those bookstore gift cards on you could do worse than a host of Frommer’s guides and of course a copy or 10 of Where Am I Wearing?

Where is Kelsey? (Soccer on a sandbar)

Another video clue in the Where is Kelsey? contest.

Poorly Made in China

Earlier this year I got an email from Paul Midler.  His book Poorly Made in China was about to be released by Wiley (my publisher). He’s a first-time author as well and we’ve become quick friends talking about first-time author experiences — things like how to best fight off mad hoards of groupies. (If you must know, I prefer to let my wife do the bouncing and Paul prefers to play dead.)

And then I read Paul’s book.

Sometimes when people say that a book changed their life, they’re just blowing smoke. In the case of Paul’s book, I mean it.

I was at the grocery charged with buying ingredients to make homemade pizza. I found the…

The divide between self-perception and reality

John Mayer makes weird faces while he’s riffing.  When asked about it, he said something like, “I thought I was making a cool face.”

Obviously there is a divide between the mental perception of oneself and reality.  With that said, here are some photos of me taken while speaking at Menlo High School near San Francisco.

A lawyer/dinner guest made the mistake of asking teacher, Taylor Mali, what he made. Awesomeness ensued.

Well, I grew up quick and I grew up mean,
My fist got hard and my wits got keen,

My name is Kelsey and I’m a dude.

I have more than my share of chest hair — a result of always obliging when someone told me, “Here son, eat this. It’ll put hair on your chest.”

I think someone should invent cologne that smells like campfire or salty sea air.

I cry once every few years. But if you saw me crying, I would imagine whooping you on the spot, but wouldn’t because what kinda of sissy fights while he’s crying.

I drink beer (usually not much more than one or two at a time because it gives me a stomachache).

I spit (if I have something in…

Where in the world is Kelsey? Clue #5 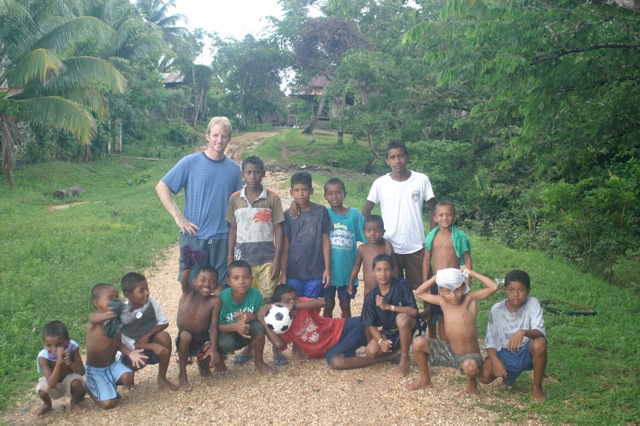 Could one of these kids be the next Julio Cesar De Leon?