Michael Jackson and Dracula Were Here

When I stood at Dracula’s grave in Romania my head was filled with one thought: “Michael Jackson was here.”

Vlad Tepes is the Dracula of history.  He wasn’t a vampire, just a ruler who believed in corporal punishment, namely driving huge stakes through people and letting them slowly die.  For this he earned his nickname The Impaler.  Bram Stoker based his novel on Vlad.

Vlad’s tomb is famous for two things: it’s empty and Michael Jackson visited it when he came to Romania on his Dangerous World Tour.

To get to the Snagov monastery where Vlad’s empty grave is I had to paddle two other tourists and my cab driver in a rowboat to the island where it sits.  A family lives on the island and runs tours… A thousand words: Batman is coming to town

I’m leaving soon to pickup my brother, Kyle, and his wife, Jenn, from the airport. In honor of their visit, here’s a picture of Kyle.

Lookout villains of Muncie! Batman is coming to town! (Note to villains of Gotham: run amok with reckless abandon. Live it up!) 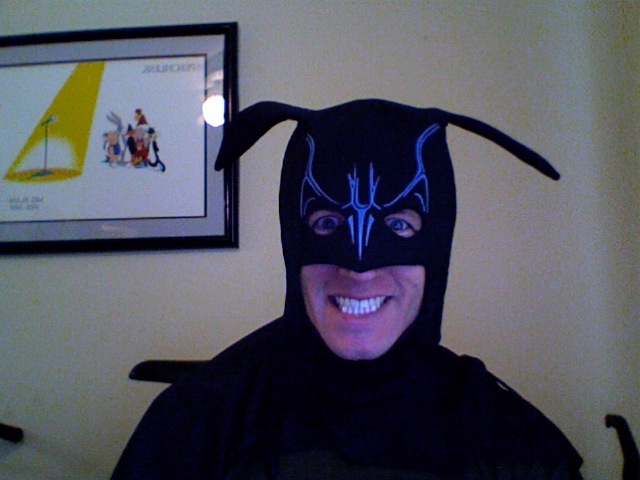 The New (and improved) "Where Am I Wearing?" Trailer

Real life pros did this one. Whatchya think?

Are you a bead maker or a boob flasher?

As unemployment rises we tend to think more about work.  I guess it the “absence makes the heart grow fonder” thing.  Why we work? How we work? What we get out of work?

Yesterday I heard philosopher Alain de Botton talking about his new book, The Pleasure and Sorrows of Work. A lot of the discussion centered around jobs such as the person who fixes the machine that makes the part that makes the box in which the plastic bags are shipped that hold the cookies that people eat.

Ask that person what their job provides the world?  What sense of accomplishment it gives them? They might not have an answer.

Industrialization and technology have separated many of us from…

Chinese reader worried about the future of her village

One of the things I ask myself about my book is, “Did I get China right?”  I was only in China for a month. (Remember there was no book deal at the time and my leap of faith was getting really expensive.)  While I don’t think it’s possible to get a place, especially China, right, I’m overjoyed to get this email validating that I didn’t get it all wrong. And, according to the awesome, fabtabulous, make-my-day letter I just received from a reader in China, I actually might’ve  been pretty close.

I’m a reader of your book ‘Where am I wearing’. I spent two days finishing your book and I really love it. I’ve learned a lot from your trips and the effort that you made.