I spoke at Centenary College in Shreveport on Monday.  From their press release: “Timmerman began his talk by showing a pair of boxers to the students.” I don’t think that’s a crime. Centenary College had one of the first Glocal offices I’ve ever come across.  They call it the Office of Global Engagement.  Students have to meet an intercultural requirement, which usually involves a study abroad experience, and they also have a local volunteer requirement.  They are producing glocals. How awesome is that? 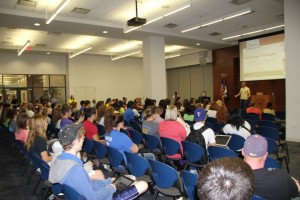 Then it was off to Texas A&M Texarkana where “Where Am I Wearing?” was selected as their freshman common reader. (Texarkana College students also joined us for a few events.)  I stayed in the dorm, which is not as bad as it sounds, and actually quite nice.  I had an invite to stay up all night doing nails and talking metaphysics and boys, but I was too tired. The faculty was great, especially Ashlee Spearman who took me from place to place.  By the end of my visit and countless chats with classes Ashlee could field most of the questions students asked me.  We were also involved in a golf cart accident.  I’ve been in worse golf cart accidents.

On Wednesday I flew to West Texas A&M where I was met by Kendra Campbell and Amy Andersen wearing “Where Am I Wearing? / Check the Tag!” shirts! That made me feel special right off the bat.  President O’Brien invited us over for dinner and we had way more utensils than were needed.  The steak was like butter! Seriously, you could cut it with your fork. It was a fancy shindig, but that didn’t stop me from smearing chocolate cake all over the crotch of my pants.  I also learned that when someone invited you to sit down in the dining room, they actually mean to stand behind your chair until the hostess takes her seat.  I was the only one sitting at the table and everyone else was standing. Awkward! The great thing was that despite the formal setting, everyone was really down-to-earth and SO passionate about connecting students to the world. 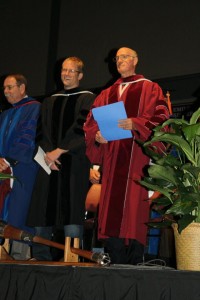 At the freshman convocation where I was the featured speaker, I had to wear regalia, but no one told me what I had to wear under my regalia. I wore my Jingle These boxers over my blue jeans.  It was such an honor to talk to 1,200 folks, most of whom had read my book and knew the story of Arifa and all of the other garment workers I met on my journey.

On Friday WTAMU professors Nick Gerlich and Kris Drumheller arranged for me to visit Palo Duro high school.  It was homecoming and everyone was wearing ginormous mums.  Palo Duro was one of the most diverse high schools I’ve ever seen.  I talked with the junior and seniors and then visited some individual classes.  One class had students from Thailand, Laos, Kenya, and Ethiopia.  Because of that I might be able to forgive them for not knowing what I was talking about when I made a Bon Jovi reference.

After Palo Duro. I spray painted Cadillacs, which is pretty much a must if you visit Amarillo.

It was an amazing week.  When I set out on the journey that became “Where Am I Wearing?” I had no idea I would ever get the chance to share the story of the workers I met on this level.  It’s an absolute honor and a whole lot of fun! 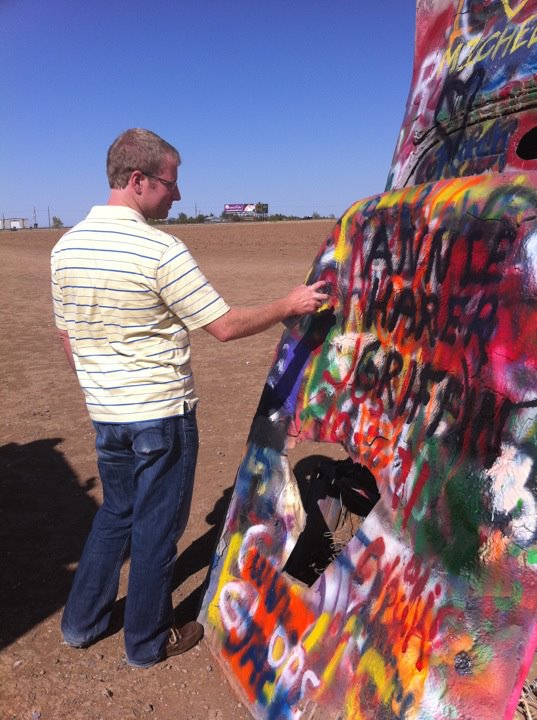 I don’t think you have been to Poenari Citadel at all….Its 1,480 steps up that massive hill….can you tell me if there are any bridges to cross? If so, how many….and do you have any pictures to back that up? I think you made the whole thing up.

Martin, Why in the world would I make that up? I was there in 2005. There were a bunch of steps and a few bridges. It was next to a power station of some type. Anyhow, here’s an article I wrote about it: http://whereamiwearing.com/a-night-alone-at-castle-dracula/

This is a very good tip particularly to those fresh to the blogosphere.
Simple but very accurate info… Thank you for sharing this one.
A must read article!