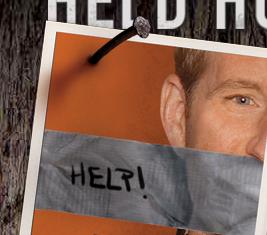 You suffer the bad bits and then “cheese” you’re on Barbara Walters promoting your book that follows your life from a young balsa wood plane hobbyist to your doomed expedition in search of the perfect Ochroma pyramidale tree. The first 7/8ths of the book are crap. You know it. Barb knows it. The American people know it. No one really cares about your daddy issues and that kids made fun of your pinstriped blue jeans in 3rd grade. But that last 1/8th is gold. Who knew that you could carve a full size balsa hang glider with a sharpened spork and fly to safety?

I watch Ms. Walter’s do these interviews with former hostages and think, “That could have been me; I travel with a spork.”

I’m currently being held hostage by Apathy, which is an entirely different thing. It’s almost the exact opposite from my ideal hostage situation really. Being Apathy’s hostage is quite comfortable. Apathy let’s me live my life and we kind of have this “don’t ask, don’t tell” rule between us.

However, lately I’ve been angering Apathy. I’ve become more involved with issues in my community, traveled around the world to meet the people who made my clothes, and, in general, just started to give a darn about a lot more things.

Apathy wants me to return to the PlayStation, college days, during which I would kill an entire weekend playing Madden or Final Fantasy or doing absolutely nothing but eating when I wanted to eat, doing what I wanted to be doing, and sleeping when I wanted to sleep. So, when I told Apathy that I would be going to Kenya to raise awareness about life in the slums of Kibera – Africa’s second largest urban slum – Apathy duct-taped me to my La-Z-Boy.

I told Apathy that I have really hairy arms and would much prefer to be tied to the recliner, but Apathy wouldn’t listen. That’s how much our relationship has eroded. Out came the duct tape.

If enough people show their support of my efforts, Apathy will be forced to release me. There are a number of ways you can do this:

1) You can donate to the cause – your donation will go to Life In Abundance and help support their work in Africa. (I’m donating $10 today as a part of my #ten4tues project)
2) You can decide my fate in Kenya
3) Join Life in Abundance on Facebook
4) Follow #apathyhostage on twitter

In a sense we all are held hostage by apathy and always will be. There will always be wrongs and injustices that we won’t bother to acknowledge. We know they exist, but get too wrapped up in our daily lives to address. Yes, we can only do so much, but we should do something.

I’m going to Kenya with Life in Abundance, Rule29, and McDonald Photography.

Although I most likely won’t be sharing tales of a harrowing escape with Barbara Walters upon my return, I’ll see the world differently, and that’s all the reward I need.

I hope you’ll come along for the ride.

When are you going to Kenya?

Leaving sometime in April. Not sure yet.