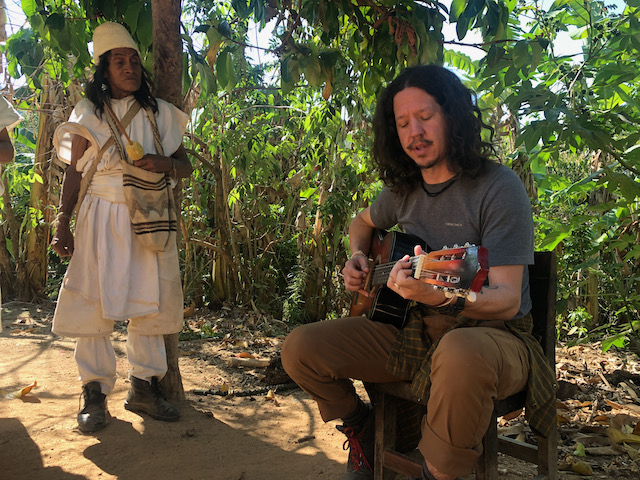 The Arhuaco are an Indigenous People who live in the Sierra Nevada mountains of northern Colombia. Like most Indigenous People around the world, they’ve had less than favorable interactions with the outsiders. They were hesitant to have us visit and much of our first day was spent sitting with one of their spiritual leaders, who had us examine our own intentions for being there. Was it only to take pictures and stories or were we there to partner with them to help share their worldview?

Our permission was officially granted and then they blessed cotton bracelets that they tied around our wrists. They told us, “The Mountains are happy you are here.”

One day we were taken into the jungle with one of their most revered spiritual leaders, a man named Enemias.  They cleared some vegetation for us and we were told to sit. Enemias led us through more self-reflection. As we sat, I, and I alone, was devoured by ants. I think the mountains wanted to eat me.

Often my work as a writer isn’t to write. It’s to experience. As Enemias talked, I wanted to scribble down notes. I could see the same tension on Cliff’s face as he stared down at his camera he hadn’t used all day. And then Enemias stood. The afternoon sun lit him perfectly. I could see Cliff’s camera finger twitching.

Cliff calmed and a peace came over him. He said that in that moment he thought of a scene from the movie The Secret Life of Walter Mitty, in which Walter Mitty played by Ben Stiller tracks down a legendary wildlife photographer, played by Sean Penn, perched on a mountainside. As they talk a snow leopard steps into the photographers frame, opens its mouth. It’s the perfect shot.

Photographer: “Sometimes I don’t. If I like a moment, for me, personally, I don’t like to have the distraction of the camera. I just want to stay in it.”

Walter: Stay in it?

I hadn’t even realized there was an opening in the canopy to let the sun penetrate. Enemias was perfectly silhouetted, yet somehow there was still light reflecting on his face. He stood as still as a tree.

We stayed in it. Right there.

I Like!! Really appreciate you sharing this blog post.Really thank you! Keep writing.
okbetsports.ph