When I look at the Syrian refugees, I think about what it must be like to be forced from my home. What about my cat, my favorite coffee mug, our family photos, and all of the other silly and serious things that make up a home? Like, do you go the ATM? Fill your pockets with cash?

At some point you step out your front door for the last time and you don’t have any idea where you’ll sleep next, if you’ll be safe, what this all means for the future of your kids.

“The Turk [smuggler] jumped into the sea, then a wave came and flipped us over. I grabbed my sons and wife and we held onto the boat,” Mr. Kurdi said, speaking slowly in Arabic and struggling at times for words.

“We stayed like that for an hour, then the first [son] died and I left him so I can help the other, then the second died, so I left him as well to help his mom and I found her dead. … What do I do. … I spent three hours waiting for the coast guard to come. The life jackets we were wearing were all fake. …

“My wife is my world and I have nothing, by God. I don’t even think of getting married again or having more kids. … I am choking, I cannot breathe. They died in my arms.”

This is the reality for 4 million Syrians and 3 million Iraqis.

And the United States has promised to take in 10,000 (1.25%) and many are arguing against it because they might be terrorists. John Oliver points out that to date 1 in 261,000 of the refugees we’ve taken in have been part of terrorist plots.

Yoda said it best:  “Fear is the path to the dark side. Fear leads to anger. Anger leads to hate. Hate leads to suffering.” 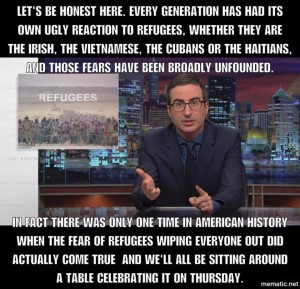 “If you’re a refugee, first, you apply through the United Nations High Commission of Refugees, which collects documents and performs interviews. Incidentally, less than 1 percent of refugees worldwide end up being recommended for resettlement, but if you’re one of them, you may then be referred to the State Department to begin the vetting process. At this point, more information is collected, and you’ll be put through security screenings by the National Counterterrorism Center, the FBI, and the Department of Homeland Security, and if you’re a Syrian refugee, you’ll get an additional layer of screening called the Syria Enhanced Review, which may include a further check by a special part of Homeland Security—the USCIS [United States Citizenship and Immigration Services] fraud detection and national security directorate.

“Then, you finally get an interview with USCIS officers and you’ll also be fingerprinted so your prints can be run through the biometric databases of the FBI, Department of Homeland Security, and the Department of Defense. And, if you make it through all that, you’ll also have health screenings which, let’s face it, may not go too well for you because you may have given yourself a stroke going through this process so far. But, if everything comes back clear, you’ll be enrolled in cultural orientation classes—all while your information continues to be checked recurrently against terrorist databases to make sure that no new information comes in that wasn’t caught before.

“All of that has to happen before you get near a plane! This process typically takes 18 to 24 months once you’ve been referred to the UN by the United States. This is the most rigorous vetting anyone has to face before entering this country. No terrorist in their right mind would choose this path when the visa process requires far less effort.”

You can watch the whole thing here:

In the Huffington Post I wrote about a group of Hoosiers, roughly 100 so far, who have donated to the Syrian family turned away by the state of Indiana. Read Hoosiers extend hospitality to Syrian refugees despite Indiana’s position.

Here are two excerpts from the piece:

One family and $1,500 (or even $20,000) by no means makes a dent in the human tragedy and political quagmire playing out in Syria. But if there’s ever going to be relief for the refugees or a solution to the crisis, it will likely begin with the compassion of individuals—a citizen, a president, a religious leader, maybe even an English professor from Indiana—and ripple out in concentric circles of compassion influencing others to think, feel, and act.

If you are interested in donating to the campaign, visit Hoosiers Welcoming Syrians.

The hardest part of all this is what do we do? I see the photos and news reports and I feel them. Years from now there will be memorials about these families. There will be mottos, which will be some version of “never forget.” We must not become desensitized to these reports. We must “never forget” as they are happening. We must witness. We must remember.

But the reality is we will forget. We will move on. As Christoper Dickey, Daily Beast editor and long-time foreign correspondent told CNN: “The ability for the public to forget a crisis like this is one of the most terrifying aspects of it.”

This paragraph provides clear idea in support of the new people of blogging, that really how to
do blogging.

Thanks for sharing your thoughts about blogroll.
Regards