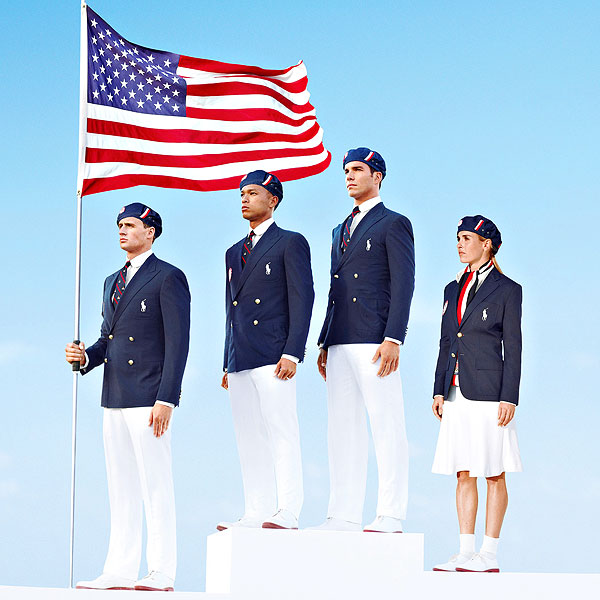 I had no idea Hugo Boss had a factory in Ohio. Brown’s point is a good one: Yes, 97% of our clothes are made overseas, but there are factories here that still could have done the job.

As for the other members of Congress who I’ve never heard speak on this issue before… they totally are. This is an easy issue to look good on. Members of Congress are practically fighting for the mic to complain about this.

No help from taxpayers

The United States is one of the few countries in the world that doesn’t financially support their athletes.

“Unlike most Olympic teams around the world, the U.S. Olympic Team is privately funded and we’re grateful for the support of our sponsors,” USOC spokesman Patrick Sandusky said in a statement. “We’re proud of our partnership with Ralph Lauren, an iconic American company, and excited to watch America’s finest athletes compete at the upcoming Games in London.”

To be fair, there are plenty of American businesses supporting the USOC, but my point is that the scramble for private funding has led to them casting a net beyond our border.

The mic members of Congress talks into complaining about made in China uniforms was more than likely made in China.

The shoes they walked to the mic in were also probably made in China.

So are the Blackberries and iPhones from which they tweet their disgust.

If they want to tackle the larger outsourcing issues, have at it. But don’t ignore the loss of U.S. manufacturing 99% of the time and complain about made in China when it’s convenient and good photo-op.

What do you think? Should Team USA’s uniforms be made in the USA?

I think that a whole lot of our manufacturing needs to be returned to the USA!!!! But, in order to accomplish that, we need to abolish about 95% of the prohibitive, arduous rules & regulations placed on American business. Government needs to get out of our lives!!!

Just want to say your article is as surprising. The clarity in your post is
simply great and i can assume you’re an expert on this subject.
Fine with your permission let me to grab your RSS feed to
keep up to date with forthcoming post. Thanks a million and please continue
the enjoyable work.