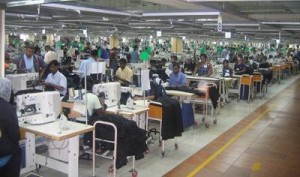 I’m the kind of guy that people think to email or to tweet when news of a Jordanian “Rape Factory” breaks.  Uh, thanks everybody.  I received countless emails encouraging me to sign the Change.org petition that asked the CEOs of the American companies that source from the factory to immediately end the abuse at these factories.  I signed it and went on with my day, not exactly feeling swell about the call to action I had just answered.  What difference can a little online petition do?

Well, apparently some.  On Day 55 of the campaign the petition had 7,000 signatures. On Day 58, after stories in the Wall Street Journal, Huffington Post, and on blogs across the blogosphere, the campaign had 100,000 signatures.  A few days later reports were coming in that conditions at the factory had moderately improved:

Previously, workers were having the cost of their meals taken out of their meager wages, despite contracts which stated meals would be provided. Now, workers are provided meals in accordance with their contract and are able to keep their whole wages. Similarly, many workers who were supposed to be working 12 hour shifts were actually working 15 or 18 hour shifts, with no overtime pay. Now, 12 hours shifts are standard. And finally, many workers were forced to work on Fridays, the local holy day, and during Ramadan. Now they have Fridays off and are allowed to observe Ramadan freely. But perhaps most significantly, there have been no reports of new rapes since the campaign began.

I’ve talked with garment workers about similar conditions. I hate to say the above violations are par for the course, but I think they are (the level of sexual violence at this factory may be an extreme example) .  That doesn’t make them any less wrong.

The workers who have leveled the complaints are from Sri Lanka and Bangladesh. The Bangladeshi workers left their home and jobs in Bangladesh where they earned 21-cents/hour to earn 61-cents/hour in Jordan.

I hope you’ll join me in signing the petition, but know that this factory is just one of many, and that wherever people are desperate and impoverished, business practices and human rights violations like the above flourish.  WalMart and Target are complicit in the wrongdoings, but so are you and me.

Where the roots of poverty grow, injustice blooms.

Signed it! Good post. Thanks for reminding us that online petitions can make a difference!