I leave for Kenya in about one month and will be there for about a month. One of the groups I will be visiting and reporting on is NURU. This morning Billy Williams (no word on if his middle name is Dee, he likes to drink Colt 45, or if he starred in Star Wars) contacted me and asked if I could post his note below. Ironically, it’s about an event that I was hoping to participate in at Ball State, but just happens to be the same day I’m leaving for Africa.

Anyhow, I was happy to oblige and I’m pumped to look in on Nuru’s exciting work fighting poverty in Africa.

Take it away Lando!

Last year, Nuru International hosted its first nationwide extreme poverty awareness event and campaign. It was an experiential event designed to raise awareness and empathy for the daily routine of hundreds of women and girls in the developing world. We called it “Be Hope To Her.” The event had nearly 1000 people participate on 11 college campuses, and raised over $36,000 that led to the drilling of four deep water wells in Kuria, Kenya and thousands of changed lives.

This year, we are pleased to announce that there are twenty four colleges who are participating in the event (including one in Florence, Italy). We also have three city-wide events happening in SoCal, Seattle, and Pittsburgh.

So what is it all about? In essence, it’s an event about being hope. Over 2.4 billion people go daily without nearby access to safe, clean, drinking water. Women and girls in these communities are usually charged with the task of gathering the water for their families as a daily practice. Imagine spending three hours of your day gathering water so you and your family can have it to drink, to bathe, to do laundry, to wash dishes. Imagine if that water were contaminated and needed boiled before anyone could drink it. Imagine not being able to attend school because you had been charged with this task for the sake of your family’s survival. It doesn’t have to be this way. In fact, you can be part of the generation that stands up and says enough is enough, and chooses to make a difference. 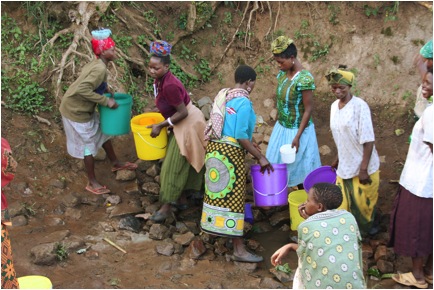 Recently, I was reading a blog from our water and sanitation program manager, Nicole Scott, that talked about how life has changed in Kuria since the drilling of wells in the community. One of the stories told was about kids at one of the schools where the wells were drilled. The teachers said that the kids are playing now instead of running into the bush to try to find water during recess. This statement really hit me personally. I started thinking back to elementary school and recess. I can remember running, playing football, tag, and kickball, and just all around having a good time with friends. I remember running myself into a frenzy knowing that at the end of recess, everyone in my class would line up at a water fountain (I think the fountain was in my classroom too), and get a drink of water before settling back into class. What would it have been like if there were no drinking fountains in my school. What if my recess was spent looking for ANY water source near the school? What would my concentration level have been like in the classroom? It seems utterly unthinkable that anyone in the modern era would have to deal with this on a daily basis. 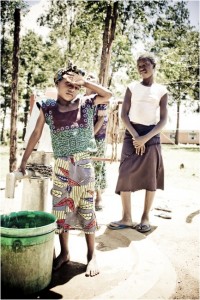 And that’s why we are asking you to join in Be Hope To Her this year. We believe that together we can end extreme poverty. We believe that together we can pioneer solutions for whole communities to not only have convenient access to safe, clean drinking water, but to lift themselves out of extreme poverty for good! Will you join us in this effort?

The first thing you can do isregister for the event. This event is going to take place in a variety of locations across the country, so chances are you live fairly close to one of the locations (and if not, road trips are always fun—especially those with a greater purpose!).

Then, invite your friends, relatives, coworkers, and classmates to get involved. (What’s a road trip without friends?) We truly believe we can end extreme poverty, together, one community at a time, and we will work faster and more effectively as we have more people involved in this work. Imagine what it will be like to one day say that WE were the generation who said enough is enough and ended extreme poverty! This goal is within our reach, but it is going to take more than a few getting involved. Be Hope To Her is a great “first step” for folks to take as they join us in this work.

After you have registered and started recruiting your friends to get involved, you can begin raising funds for your campus. There was actually a recent blog post on the Nuru website that includes some helpful hints to some FUNdraising activities! I definitely recommend you check it out.

I can guarantee that if you participate in this event, you will NEVER look at this issue in the same way again. And your friends won’t either. Not only that, but you will be offering them a tangible first step in the journey to be the generation that ends extreme poverty!!!