We arrived to the town of Poura, Burkina Faso, at dusk. There were no rooms to be had. The proprietor of the town’s only hotel had taken all of the keys with him on vacation. Fortunately, one of my taxi co-riders – a teenager named Karim, decked out in a new hip-hop outfit complete with bling – took pity on me.

“In here,” he showed me into his room, a hot, dark room, without electricity, in a building that had seven other such rooms. Even though I couldn’t see anyone, I heard and smelled humans sleeping on the floor.

“Where can I use the bathroom?”I asked. 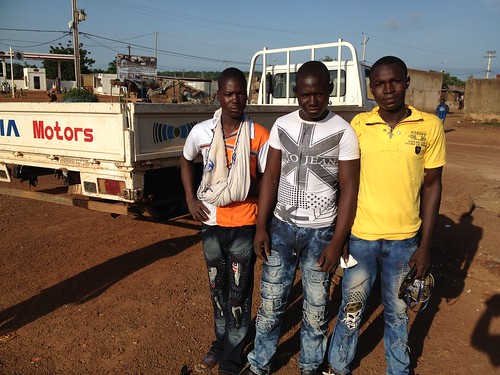 Master? Oh, no, here we go again. In Ivory Coast while researching cocoa I met a slave named Solo, tried to free him and was nearly arrested. I wrote about the experience extensively in my book “Where Am I Eating?”

As it turns out, the teenager, Karim, was a 15-year-old gold miner. He worked in his master’s mine and was returning from Ouagadougou where he made a run to sell his master’s gold.

Karim’s master looked me up and down, and I did my best to not look like a journalist. He offered me the floor of his guesthouse, which I hesitantly accepted but really had no choice. I stayed up with his child laborers that night and talked about their lives.

“My parents work in the cocoa fields of Ivory Coast,” Karim said. “They can’t afford to feed and clothe me so they send me here.”

Karim hadn’t seen his parents in two years. He told me that while he thinks he knows where they live, that it is just an assumption at this point. He has worked here since he was 13.

We jammed to a stereo powered by a car battery. Between songs performed by Akon and Chamillionaire, there were distant conversations and the sound of animals and humans turning in for the evening.

“Uh…wow.” I picture myself standing in a mine staring at child laborers slaving away for tiny pieces of gold. Suddenly my gold wedding band felt a little heavier. “I better not.”

I wanted to seem as disinterested in the workers and the gold as possible. I just wanted to leave this village, find Solo’s parents in Ghana and leave West Africa. I had seen more than I was able to handle already.

I slept with an ear and eye open that night, afraid I was going to be abducted at any point. In the morning the master sent me on my way and gave me the gold nugget as a reminder of his hospitality.

We communicated through Karim’s broken English and hand gestures. The language barrier would keep me from hearing his entire story. The fact he was a slave and I was a journalist in a remote region of a remote land scared me. I was too afraid to carry his story, so instead I carry the gold nugget.

The gold nugget, more like a pebble, makes a small leather bump that I rub every time I pull out my wallet to buy something. It’s only worth $6, but it’s a priceless reminder that stories are heavy and too many of them are untold. And for those of us charged with carrying them and telling them, they forever change us.

The stories of factory workers and farmers, mothers and fathers, around the world have changed the way I live my life as a father, husband, giver, volunteer, a global and local citizen. The stories are why I co-founded The Facing Project with my friend J.R. Jamison. The Facing Project is a storytelling project that connects people through stories to strengthen community. It allows other writers to carry the stories of their neighbors. To feel that weight, that responsibility, to change and be changed.

We all have stories to share and to carry. What are yours?