WHERE AM I EATING? 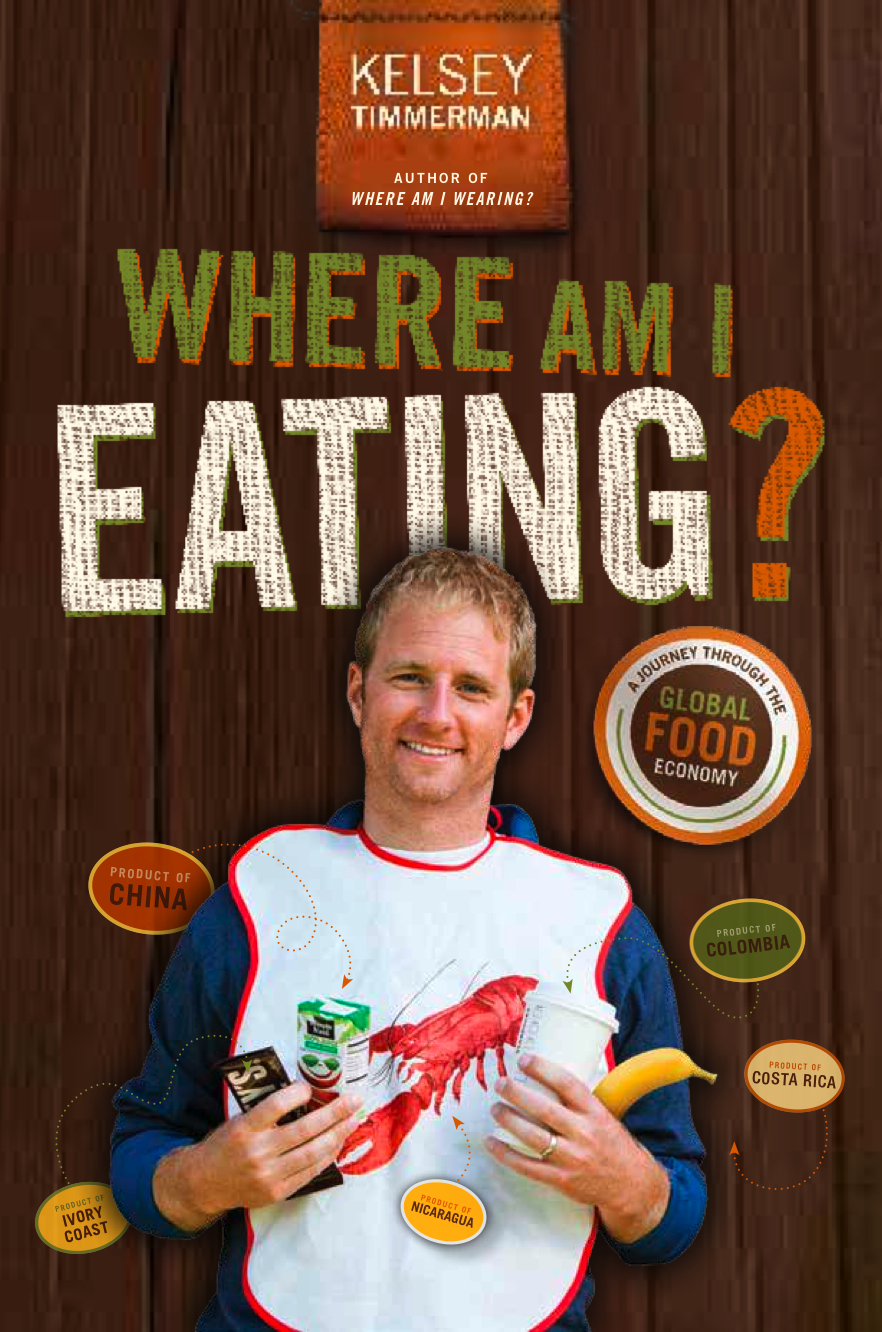 Kelsey’s new book WHERE AM I EATING? A JOURNEY THROUGH THE GLOBAL FOOD ECONOMY comes out May 2013. Here’s a taste…

My Grandpa was a farmer. My Dad farmed growing up. My name is Kelsey Timmerman and I couldn’t make boxed Mac ‘n Cheese.

This is how out of touch I was with food.

I used to say if there were a pill to take instead of eating, that I would take it. I was too lazy to shop, cook, clean, repeat. It was too much work.

But in 2009 the US government began to require Country of Origin Labeling on most foods. I was amazed at how global our diet had become.

The local / farmer’s market movement is growing, but not as fast as the global food movement. In the past decade we’ve doubled the amount of food we import. Before I ate anything I started to ask myself….

Where Am I Eating? and I looked for the labels.

I followed my Starbucks coffee to Colombia. I asked Starbucks for help locating the Colombian farmers who supply them, but they told me that was proprietary information.

Proprietary information or not, I found Felipe, a father of three, who grows coffee on a steep, eroded mountain side in southern Colombia. He let me pick coffee, but mainly I clung to his trees like a stripper on a pole as I used every part of my body to NOT fall off the mountain. Felipe faces falling coffee prices, paramilitary soldiers, and a changing climate. I followed my Dole banana to Costa Rica where I got up at 4AM and biked into Dole’s banana jungle in a monsoon alongside Juan. Juan has given 25-years and half-a-finger to Dole. He won worker of the year in 2005. The award is unsigned and hangs on his wall in a wood frame he bought himself.

I followed my chocolate bar to the Ivory Coast where I met a 20-year-old slave on a cocoa farm who left his parents in Ghana without saying goodbye. He gave me this note to deliver to them:

“My mother and father, I am sorry for not telling you before leaving. I am not missing. I will be back again. You don’t worry about me. I am in the Ivory Coast.”

Perhaps against my better judgment, I hatched a plan to free him, but then he went missing again. The experience shook my soul.

I met untrained divers in Nicaragua who dive deeper and deeper in search of a declining population of lobster. 100% of the divers have diving injuries. But perhaps the only thing worse than lobster diving is ending lobster diving. There aren’t any other jobs. In China, I dined with an apple farmer’s daughter at a swanky 10th floor restaurant overlooking Shanghai. While apple farmers in the US struggle with falling apple juice prices since China entered the market, Mr. Feng in China is sending his kids to college and helping them buy homes.

Given that China has had a host of food scares and that less than 2% of food imported into the U.S. is inspected, do I want my kids drinking apple juice produced in China? Do you want yours?

There are more than a billion farmers on the planet. 60% of them live in poverty. They feed us, and, for the most part, we value their efforts less and less.

Over the course of this journey, I ate bat, cane rat, and guinea pig, yucca, sugar cane, coffee, and fruits and vegetables I had never heard of. I shook the calloused hands of the farmers who fed me – the people who feed us – and witnessed a relationship between man and land that perhaps only my grandpa would recognize.

Ultimately, our policies, our environmental practices, our appetite for cheaper, fresher food year round -how we eat – impacts the way they live.

Whether a lobster diver or lobster diner, we share an environment and a planet, but more than that we have a shared humanity and an appetite for living healthy lives in which our children can grow.

The world’s population is growing exponentially but the number of farmers is declining. Farming is a livelihood and perhaps a lifestyle that we can’t live without.