Another reason I wish I had HBO

I heard about the documentary “Which way is home?” on NPR this morning. It follows kids leaving their homes in Central America and sneaking across borders on their way to the United States. Just another reminder of the desperation that exists in our world and the risks people will take to overcome it.

Shoot Me: What good is humiliation if you can't share it?

I am sick of looking at me.

I just scrolled through 600+ photos of me to select a few for my new Press Kit page. It was my first photo shoot since my high school senior pictures.  Maybe I’ll print out these photos and on the back I’ll write you a personal note about how much fun we’ve had these last four years and how I know we’ll keep in touch because we are totally BFFs.  Or maybe I’ll just select the goofiest photos and post them  below.

Brian MacDonald of MacDonald Photography shot the 600 photos plus my new book trailer. I wonder if his finger hurt as much from snapping shots as my face hurt from smiling.  We did have some fun doing it, as evidenced below,…

Me and Optimus Prime

That’s how much he’s going for on ebay. This makes me happy because I own this action figure already. Sure, he isn’t in the box and he has swapped a little paint with the Deceptagons. But still, it’s about time the world realized the value of Transformers.

Even if my Optimus Prime were in mint condition and worth $5K, I would not sell him.

Transformers only aired for two years in the early 80’s. Their resurgence in popularity reflects my generations newfound buying power. 10 years ago OP probably went for a few hundred on ebay, but now you could go to the car dealer and buy a real car for what he…

How many people does it take to make a pair of jeans?

Readers of  “Where Am I Wearing?” will no doubt recognize this story about my visit to a blue jean factory in Cambodia.  Of course, the book wasn’t accompanied with an over abundance of hand gestures. Enjoy!

A thousand words: School is in

And I complained about the hard plastic seats at my school that would stick to my legs in the summer time. 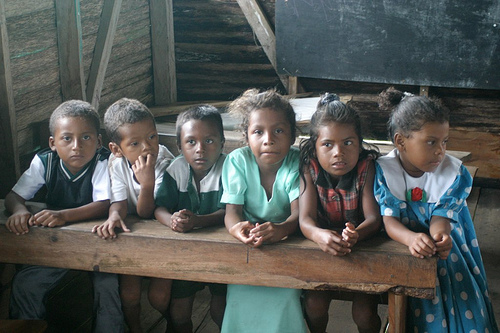 School is in on the island village of Kokata, Honduras (2005)

While there I taught the kids to play baseball. I’ve heard about authors saying that releasing your book to the world is like becoming a new parent – all that excitement and anxiety.

Since my book and my first child were separated by little more than one month, I believe I have a unique perspective on this and I’m prepared to make the definitive statement on the matter:

Releasing a book is nothing like having your first child. I suspect, if I would have been the one doing the pushing, sweating, and contracting for 23 hours, I would be even more adamant about this, if not offended by the comparison.

Sure, I’m concerned about how my book is perceived by the world-at-large, but what little (I’m lucky) criticism the book…

Bill Clinton has got it.  And by it, of course I mean the Most Interesting Man in the World Syndrome.

Jon Stewart on the Daily Show:

The man hopped on a plane to North Korea, freed a couple of ladies, and got back in time to watch the season finale of So You Think You Can Dance!  You know who he is…

He’s The Most Interesting Man in the World 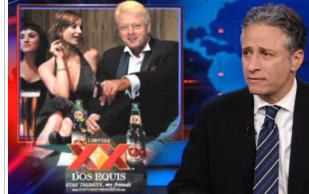 In Lesotho, A River Runs Denim

Do you know where Lesotho is? I’ll be honest, I don’t.

I do know that it’s in Africa. I look it up on Google Maps every time I wear my favorite corduroy pants that were made there. But I just can’t seem to commit to memory where in Africa Lesotho is.

“Lesotho” doesn’t seem like a real name of a country to me, but more of an assassin’s name in the StarWars. Each time I try to remember where exactly Lesotho is, I start imagining what the assassin would look like: how far his eyes are apart; the type of laser gun he favors; and other such nonsense. I picture the assassin wearing my brown cords blasting princesses and Jedi into smithereens.

This is the way my mind works….

Read More >
8 comments
Tweet
@KelseyTimmerman
says:
Stop listening to podcasts about the thing and start doing the fucking thing. (A note to myself & anyone else who needs it)
11 hours ago | FOLLOW ME! | RETWEET