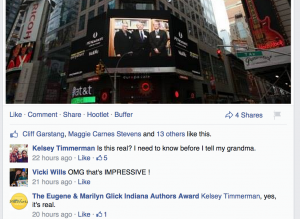 I was a bit nervous in sharing the photo because it could be perceived as: “Hey everybody look at me! I’m such a big deal I made it onto a Times Square Jumbotron.”

But being overly humble can make one look like a jackass too. “I’m on a Jumbotron . . . no big deal. It’s not even worth noting just a typical Monday.”

“Online networks [blitz] user with a steady stream of status updates, which by some unwritten rule, accentuate the positive and eliminate the negative in other people’s social lives–making  your own life look so much worse in comparison.”

Look, my life isn’t suits and 20-foot tall images of me overlooking Times Square.  I don’t even want it to be that, especially the suit part. I wouldn’t change places with anyone. I’ve got the perfect job and family for me, but it’s not all peaches and cream and awards. I have self-doubts, concerns for loved ones, and sometimes I get in ruts. I wasn’t depressed after writing and living WHERE AM I EATING, but I was something and I was exhausted.

Anyhow, how do I feel about this Jumbotron thing?

It’s cool in the same way that getting sprayed by a skunk was cool. Well, the actual getting sprayed wasn’t cool, but the story is fun. The skunk story has always been my go to interesting tid bit for those awkward “get to know you” mixers at conferences.  Now I’m happy to have this:

“I’m Kelsey from Muncie, Indiana. I was once on a Jumbotron in Times Square. Also, I’m not a big deal.”

All that said, winning the Indiana Author’s Award was a big deal to me and to Annie, but it does not make me a big deal. Every once in a while it is nice to have my weirdness validated.