Protests erupt in Bangladesh and Cambodia

Bangladeshis and Cambodians have taken to the streets to protest  economies and political systems in which they feel underrepresented. Both protests were featured separately in the New York Times yesterday.

I visited both of these countries in researching Where Am I Wearing. Each is a major player in the garment industry.

The industry referenced in the Bangladeshi story:

The struggle between the two political coalitions has paralyzed Bangladesh, unnerved Western governments and wounded the country’s vital garment industry.

The industry referenced in the Cambodian story:

Touch Vandeth, 24, was one of thousands of garment workers on strike who demanded a doubling of the minimum wage to $160 a month, a sharp increase that would put wages well above those of Cambodia’s regional economic competitors, including Bangladesh, Myanmar and Vietnam. Ms. Touch Vandeth, who assembles Adidas footwear at a factory on the outskirts of Phnom Penh, said she had been unable to save much money on her current salary, $80 plus overtime.

There’s a lot of talk about what importing countries, companies, brands, and consumers can do to improve the lives of factory workers in developing nations. No bill, trade policy, or certification will impact the lives of workers more than the factory workers themselves standing up to be heard.

What I don’t know is if these protests are a result of people feeling empowered and creating a movement of positive change or if they are result of people being pushed to the limit and having no choice but to take to the streets.

Either way, change is often necessary, and often ugly. Try to unseee this photo out of Bangladesh in the Times: 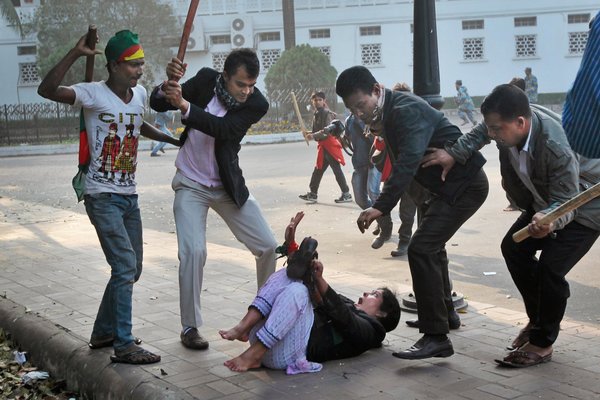 @KelseyTimmerman
says:
Picked up hay from the neighbor and said hello to his giant horse. @ Delaware County, Indiana https://t.co/ewmXQgwX5V
16 hours ago | FOLLOW ME! | RETWEET