To celebrate the release of the new updated and revised edition of Where Am I Wearing? I’m celebrating apparel companies that are making a difference by conducting two weeks of giveaways. Each day I’ll highlight a company and then giveaway an item of theirs at 9PM (ish) EST. To enter, leave a comment in that day’s blog post or on Facebook. Winner will be randomly selected. 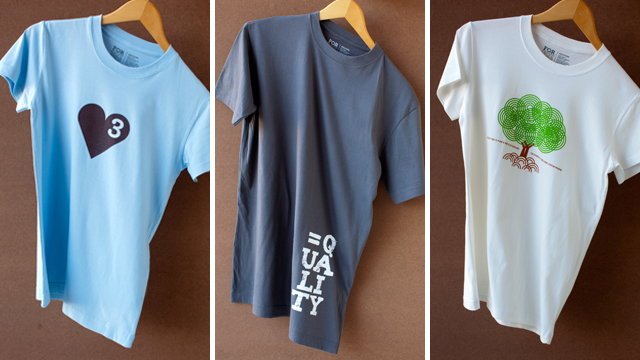 Enter a Comment below to win a Forgotten Shirt

“I received my Kony Kit yesterday and I noticed that the tshirts are made in Mexico. I’d just like to know your opinion on it! Thanks!”

That’s a note I received from a student the other day. The “Kony Kit” she mentions refers to the $30 kit, including a bracelet, T-shirt, action guide, stickers, and poster that Invisible Children was selling (it’s sold out) as part of their Kony 2012 campaign. The campaign’s goal is to raise awareness about Joseph Kony. Kony is the head of the Ugandan guerrilla group, the Lord’s Resistance Army, and infamous for his use of child soldiers. You’ve probably heard of the Kony 2012 campaign. The video that launched it is considered the most viral video ever. It was kinda big news and stirred up quite a debate.

“Wouldn’t it have been great if the shirts were made in Uganda? I know a tshirt company there.”

Forgotten shirts doesn’t own the factory in Uganda, but they support it. Know who else has supported the factory in the past? Bono, that’s who. Bono’s clothing company Edun placed an order that launched the Phenix garment factory in 2007. It was Bono’s goal to support jobs in Africa and the garment industry is typically one of the first industries to emerge. (Note: Edun has since moved some manufacturing to China. Hmm.)

My point to my Facebook buddy is that Invisible Children is all about helping Uganda recover from years of violence and war and there are few things that combat both of these better than jobs; good ones that allow parents to send their kids to school. Here’s the really odd part, Invisible Children along with Edun established the Conservation Cotton Initiative in 2008 to help cotton farmers. Tell me again why they didn’t buy shirts made from the cotton grown by the farmers they support?

I talk a lot these days about thinking and acting globally and locally, about going glocal. That the local goes global and the global goes local. Our actions here impact the lives of people around the world and their actions impact our lives. Few items of clothing capture the essence of glocal than a Forgotten Shirt.

As I mentioned before my Bono/Invisible Children tangent, Forgotten Shirts are made from Ugandan Fair Trade cotton and sewn at the Phenix factory in Kampala Uganda. In a place where exports are low and unemployment can push 90%, an order for something, anything from somewhere else is a big deal. A job has a bigger impact than a sticker.

The shirt is shipped to Minneapolis where 50 teenagers from poor neighborhoods work part-time to screen print the shirts and participates in a tutoring program. College becomes a possibility.

From Uganda to Minnesota, Forgotten Shirts give opportunities to folks facing poverty. You can’t get more glocal than that.  During a time when so many of us have forgotten about the lives of the people who make our stuff, Forgotten helps us remember.  That’s a pretty cool story.  Check ‘em out.

We love Forgotten Shirts! We’ve been in contact and are most likely going to be getting t-shirts printed for Abide w/ them. Not surprised you know about them, Kelsey!

Did the founders of IC ever say why their shirts weren’t built in Uganda?

Very fitting and thought-provoking. I am hoping/planning on a shirt from my race on Saturday to have something to wear later that day.

Do you think someone should have less clothing in order to be able to be more responsible about its origins?

Very thought provoking, but it’s great to know there are alternatives out there! Also love that this company combines global and local initiatives.

Thank you so much for bringing awareness to these companies!

I am always up for a great cause. The t- shirt is just an added bonus

JamesM, That’s a tough one. The world really relies on us to consumer. It’s distasteful to think about, but it’s the truth. When the financial crisis happened, we stopped buying so much stuff and workers lost jobs. That said, when you see the environmental impact that one T-shirt has (see yesterday’s post), it makes me want to buy less. The thing is, by supporting companies like I’m profiling many of these environmental impacts are reduced and the social impact becomes more of a positive. Great question.

jsemp, to my knowledge, no one has raised a question about where the shirts are made.

Sarah, Thank you! Great to see a longtime bud in the comments here. Hope the family is doing great. We can barely handle two rugrats, not sure how you do it!

The white-tree one is my favorite! Thanks for doing this!

I am really glad you are doing this because I have been looking for a good shirt to buy for a cause. This contest gives me lots of new options!

Every piece of clothing has a story. Think of the hundreds of stories hanging in your closet–you could write a book!

Thanks for the great comments. Jsemp wins! Keep the comments coming for a chance to win tomorrow.

Forgotten shirts are awesome in what they do! Thanks.

“Thumbs up for this site. It is good to have a website and innovation in every business. I don’t know why other business doesn’t want to afford this process.
“