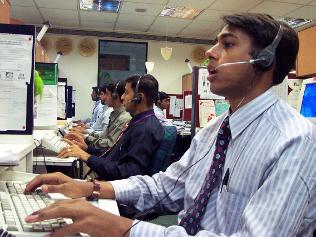 For three weeks, a culture trainer will teach us conversational skills, Australian pop culture, and the terms of the mobile-phone contracts we’ll be peddling. Those of us who pass the training course will graduate to the calling floor. Our first job at DCC will be to interrupt Australians at dinner and ask them to switch phone providers.
…

I loved that Marantz puts lives to the voices fixing all of our problems over the phone from the other side of the globe.

Every month, thousands of Indians leave their Himalayan tribes and coastal fishing towns to seek work in business process outsourcing, which includes customer service, sales, and anything else foreign corporations hire Indians to do.
…

They will earn as much as 20,000 rupees per month—around $2 per hour, or $5,000 per year if they last that long, which most will not. In a country where per-capita income is about $900 per year, a BPO salary qualifies as middle-class. Most call-center agents, however, will opt to sleep in threadbare hostels, eat like monks, and send their paychecks home. Taken together, the millions of calls they make and receive constitute one of the largest intercultural exchanges in history.”

On his first day, Nishant donned his headset, dialed the number on the screen and was connected to a 60-year-old woman in Tennessee. She had an outstanding hospital bill for $400. “I told her, ‘Just pay this, what’s the problem?’ She told me, ‘You don’t understand, I can’t pay.'” They talked for 45 minutes, and the woman cried as she told Nishant about the Iraq War and its toll on American families. “By this time I’m crying also,” Nishant said.
The same day, he was connected with a man living in a trailer. “I told him, ‘What’s a trailer?’ He told me, ‘It’s this tin shed; it gets 90 degrees; we don’t have our own washroom.'” Nishant learned more about America that first day, he told me, than he had in his whole childhood.

“When do we get paid?” asked a young man wearing a Nike cap, yellow-tinted sunglasses, and carefully crafted facial stubble. In New York, I would have pegged him as a party promoter from Long Island City.
“Very funny,” Lekha said. “You’ll be paid for your time, including this training, but only after you’ve stayed two months. You know the drill: We wouldn’t want people taking off as soon as training is over.”

During our first cigarette break, Mr. Long Island City revealed that, indeed, his plan was to do precisely that—he’d already gone through this routine at some 15 BPOs around Delhi. “Who needs to stay for the actual work? Plus,” he added, flashing a salacious smile, “that way you meet more girls.”

Call-center employees gain their financial independence at the risk of an identity crisis. A BPO salary is contingent on the worker’s ability to de-Indianize: to adopt a Western name and accent and, to some extent, attitude. Aping Western culture has long been fashionable; in the call-center classroom, it’s company policy. Agents know that their jobs only exist because of the low value the world market ascribes to Indian labor. The more they embrace the logic of global capitalism, the more they must confront the notion that they are worth less.
…

Australians are dumb and Americans will just shout at you.

“Just stating facts, guys,” Lekha began, as we scribbled notes, “Australia is known as the dumbest continent. Literally, college was unknown there until recently. So speak slowly.” Next to me, a young man in a turban wrote No college in his notebook.
“Technologically speaking, they’re somewhat backward, as well. The average person’s mobile would be no better than, say, a Nokia 3110 classic.” This drew scoffs from around the room.

“Australians drink constantly,” Lekha continued. “If you call on a Friday night, they’ll be smashed—every time. Oh, and don’t attempt to make small talk with them about their pets, okay? They can be quite touchy about animals.”

“What kind of people are there in Australia?” a trainee asked. “What are their traits?”

“Well, for one thing,” Lekha said, “let’s admit: They are quite racist. They do not like Indians. Their preferred term for us is—please don’t mind, ladies—’brown bastards.’ So if you hear that kind of language, you can just hang up the call.”
..

“Americans will just shout at you,” Sube said. Mittu agreed: “I have only been cursed by Americans. They are sharp-witted and very articulated and yet very free with their anger.”

The call centers prep the BPOs for seven types of callers:

“First is your eccentric!” she yelled.
“Second is your arrogant!
“Third is your bumpkin!
“Fourth is your quarrelsome!
“Fifth is your prudent!
“Sixth is your assertive!
“And seventh is your sweet-spoken!

What kind of caller are you? After reading this piece you might have a little more empathy for the Indian operator on the other end.

And now a message from the other T-Rex!

Kelsey – thanks for highlighting this very interesting article (which I went on to read). I agree – I really like that the author gives us an on-the-ground glimpse into lives of a few of these voices we encounter. I’m sharing it with friends and family, some family being from India.

Druzelle, great to hear. I’ll be interested to hear what your family from India thinks about it.

“And instantly he was enlightened”

“And instantly he was enlightened”.

Well Australia is an English settlement we dont have colleges really, few here and there but mainly universities. The reason we dont really like Indians is because we get spammed constantly by Indian call centers or international students trying to sell something and not taking no for an answer. In terms of education in Australia is well beyond that of India.

@KelseyTimmerman
says:
@daycathy I’m sure he made a donation to his local NPR station to help.
1 hour ago | FOLLOW ME! | RETWEET