That’s right “the marathon.” Some thought I ran the NYC marathon to help fight cancer and to check off “run a marathon” from my bucket list, but it was also to test a new pair of underwear.

Is there a Peebody award for underwear journalism?   How about a Pewlitzer?

Thanks to UnderEase anti-flatulence underwear, I’m going to have to add to my barrage of tests.

It looks as if the UnderEase folks have already tried the “Dutch Oven,” although I’m not sure about the results.

The picture on the UnderEase homepage shows a retiree sitting up in bed reading the Urantia Book, which is described on Amazon.com as:

a “revelation from celestial beings. The writers refer to Earth as “Urantia” and state their intent to “present enlarged concepts and advanced truth” as a pathway to expanded cosmic consciousness and enhanced spiritual perception.”

I challenge you to find a more enlarged concept and advanced truth than uni-sex, anti-flatulence underwear. 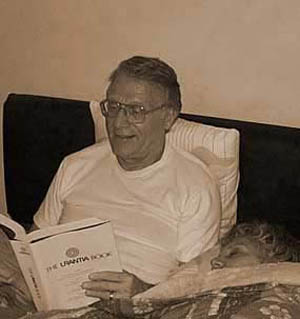 So anyhow, the guy is sitting up in bed reading about our celestial overlords who apparently invented and funded UnderEase and his wife is lying beside him, her nose just above the covers near the man’s elbow.  Her eyes are shut.  That’s where the picture fails as a marketing tool.  You can’t tell if she’s protected from her husband’s Silent But Deadly (SBD) farts or if she has in fact passed out.

The question is killing me.

Which pair should I order to test drive?

1: The uni-sex GasEaters with the non-replaceable filter

2: The original UnderEase with a new thinner replaceable thinner.

3: The 2G (2nd generation) UnderEase made from “Fabuthane Laminated Polyester fabric with a breathable film allowing the transport of heat and moisture from the inside to the outside of Under-Ease by the process of diffusion.* Fabuthane can also act as a barrier to bacteria and viruses. (*Diffusion is the net transport of molecules from an area of higher concentration to one of lower concentration.)”

For those who still aren’t sure what diffusion is from the helpful asterisk, the process also is referred to as “he who smelt it dealt it.”

The pair with the most votes by the end of the weekend will be the pair I buy and try.

To me each pair looks the same: a garbage bag trimmed to the size and shape of underwear with a maxi-pad taped to the butt.  If they’re airtight, I wonder if they’ll fill up with air as the day progresses (if you know what I mean). If so, there could be the danger of over-inflation and a not-so silent, but oh so deadly blow out.

There’s only one way to find out!

Until then, I’ll be busy thinking about how to test them. Right now I’m leaning toward a McDonald’s burrito breakfast, and  a Pizza Hut lunch, and topped off with dinner at Colonial Ciudad (Mexican food), followed by an evening of crowded elevator-riding.  Of course, I’m always open to other suggestions.

Maybe you should let Annie make that decision. After all she would be the most affected. And I would vote for White Castle hamburgers with extra onions, if the heartburn doesn’t kill you first.

I vote for the 2G UnderEase and a chimichanga with a double order of refried beans. If you’re gonna test’em. . . .test’em right.

I vote for the 2G just because it’s made with fabuthane. I don’t know what fabuthane is, but it sounds awesome. Better add a big bowl of broccoli topped with tons of cheese to the list. PS…you are going to warn Annie so that she can take Harper and run that day, right?

so, do they work or not lol

Did you ever do this test? Any results? Haven’t been able to find a follow-up post on your site.

@KelseyTimmerman
says:
“This will be a cool angle.” And so it was until 80lbs of pit bull jumped on my head. @ Delaware County, Indiana https://t.co/qzzqEiWAiD
2 days ago | FOLLOW ME! | RETWEET