CrossFit has me asking, “Can I jump on that?”

I’ve been doing CrossFit now for about a year at The Arsenal in Muncie. One of the many skills that we work on is the box jump.

No mystery here as to what this is. There’s a box and then we jump on top of it, leaving the ground with two feet and then landing on the box with two feet.  You can spot someone who does CrossFit by their scarred shins. (see photo of my shins above four months after I missed).  At some point everyone misses the box.

Most of the time during workouts we jump on 24-inch or 30-inch boxes, but sometimes we go for max height.  I think the highest I’ve done is 36-inches. I’ve never been…

What my dad taught me about the work of writing

Today I work as a full-time writer. I have no boss. Sure, I answer to the occasional editor and deadline, but on a daily basis it’s just me sitting in a seat writing sentence after sentence. When I look back on what I’ve written, sometimes it’s not good enough and I have to start all over again until I get it right.

Dad wasn’t one to deliver lessons on subject-verb agreement, spelling, or the overuse of adverbs, but when it comes to the work of writing, he taught me everything I needed to know.

I share how and what over at Wasson Nursery’s blog this week.

In WEARING I documented Amilcar’s journey.  Amilcar, a former garment worker and father of three in Honduras, decided that his job didn’t provide his family with the life he wanted to provide them. So Amilcar crossed illegally into Mexico and rode atop trains and dodged police and bandits for three months.  In some places in Mexico the locals threw bread at the migrants because the they knew why they were making the journey – their families. In other places the Mexican people were sick of desperate migrants traveling through their backyards and threw rocks at them.

While this journey is a very dangerous and a remarkable feat of endurance, love, luck, and survival, it is not rare. It’s also one not just undertaken by adults.

The Myth of the Writing Space

I’ve signed two book contracts in my writing career. After I signed each one, I thought the same thing:

Holy crap! Is that enough time to write a book?

Having the time to write was less important than having a reason to write. Turns out being contractually obligated to write is a very good motivator.

For my first book, WEARING, my editor if I could write the book in four months (all the travels had already been completed); I lied and told him yes. The truth was that I had no idea.

Releasing a book to the world isn’t like having a kid. Our first child arrived within a few months after my first book was released.  Having a new born child is way harder. For instance, a new born book has never projectile pooped on me.

But all the same, it has been fun watching my books grow up and reach more readers.  And in many ways WEARING is still the older child that all the teachers know, blazing a path for its younger sibling, EATING, in the common read world.  WEARING has been selected at like 25 different common read programs and EATING, which is out of the gate faster that WEARING, has been selected at four.

So to have one…

I know how to end child labor

It’s World Against Child Labor Day. My friends at Fair Trade USA shared this on Facebook:

Child labor won’t end by banning child labor. In fact, I think “child labor bans” distract us from doing what will end child labor: employing parents at jobs that allow them to… 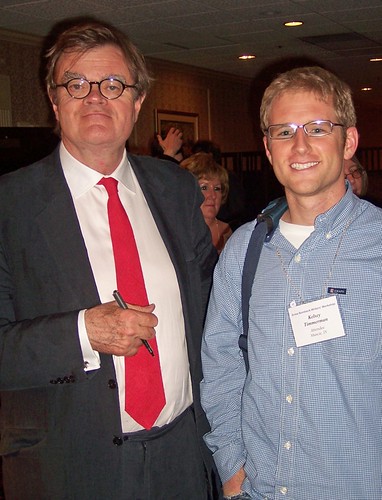 There is no “next project” I’ll spend an hour on stage sharing the stories of the factory workers and farmers I’ve met on my travels. Then the question always comes:

“What’s your next project?”

It’s a legitimate question. It’s one that I might ask an author after hearing them speak. But here’s the thing: for me, there is no next project. I feel that having a “next project” implies that I write a book, dust off my hands, and turn my back on that book to focus on the next shiny thing.

I can’t do that. I write about real people with real lives and real families. People who’ve shared their stories with me so I could share them with others.

Some of these stories I’ve told hundreds of times over…

For his birthday gift to me, my son Griffin looked at me, said, “I want Daddy!” and then ran as fast as his little legs with skinned knees would take him.

He turned three although you might not know it because he can read.  We’re not talking sight words here, we’re talking 50-cent, multi-syllable words. Like you could think of a word right now and write it down, and he’d read it to you. Even if he hasn’t seen it before.

You also might not know he’s three because he won’t talk to you.  He might say “Hi!” to you or “How are you?”, but he won’t carry on a conversation….