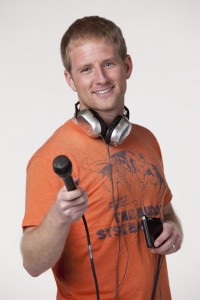 Sometimes I record the essays at home using my mini-disc player, and other times they have me record at Indiana Public Radio’s studio on the Ball State campus.  Either way, I’m coached by a producer.  I have a way of dropping T’s and doing other lazy thing with this fat southern-ish tongue I have in my mouth.

If you’re interested in recording audio on your travels, I have this mini-disc recorder and this mic.

Transom.org is a great place to get started learning about the process.  They have a really great interview in which This American Life Host Ira Glass gives his radio Manifesto.  I use Audacity (it’s free!) to edit my audio. Mainly I just cut it and let the pros do all the fancy layering and other stuff.  The version of Audacity I use has a tendency to lock up, so I save often. I probably should download the latest one.

My biggest problem with recording is how the presence of a mic held in ones face changes their behavior.  Heck, sometimes I think my moleskine notebook gets in the way.  The best quotes and conversation always seem to take place when my hands are free and I’m focused on the person who I’m talking with 100%.  This is definitely something I’m going to have to get over.

If you want to hear more of my essays on the World Vision Report, here they are!

Thanks for sharing these recording tips, Kelsey! I have started using my iPhone to document all sorts of stuff (band recordings, song ideas, thoughts, etc.). The quality isn’t quite as good as what you would get with your device, but it works well in a bind.

Good stuff. Shame I’d already read about it in the book, but good to hear the actual audio as well!

Do you know how does the quality compares to a DVR? I use a DVR for phone and in person interviews (for personal reference, not for radio). Although I’ve never yet had a need, there are high dollar mics that are compatible with my DVR.

Toby, I’ve wondered about using my iPhone with a good mic. Maybe that would make up for the lack of quality.

Katrina, I think it depends on the compression of the DVR. Does yours have different settings? Mics obviously make a huge difference too.

@KelseyTimmerman
says:
On way to feed the chickens this morning and noticed this frosty dandelion. Also noticed that the frost remained on… https://t.co/4AB2kH5bdC
14 hours ago | FOLLOW ME! | RETWEET