What a craptastic day to be a worker. The rest of the world celebrates Labor Day May 1st, but like football and our refusal of the metric system, we like to do things different (If you’re curious why, here’s last year’s Labor Day post).

Unemployment is pushing double digits in the U.S. And here are a few more depressing stats from the wounded U.S. economy (via the Economic Institute ):

• New jobs needed per month to keep up with population growth: 127,000

• Underemployment rate: 16.8%; Share of workers un- or underemployed: roughly 1 in 6

The New York Times has a slideshow of the unemployed who aren’t counted in the above stats because they’ve stopped looking for work; essentially they’ve give up.

Dayton, Ohio, poor, poor Dayton, the place I referred to as “the city” growing up in rural Ohio, lost many factories in the past year including a GM assembly plant. This morning I heard about a new documentary (via NPR) airing on HBO tonight – “The Last Truck.” Here’s the trailer:

You should give the NPR interview a listen. The workers talk about the last truck on the line and how when they had finished installing their widget or sprocket they just followed the truck down the line. By the time the truck got to the end, everyone that had a hand in making it was there. Crying. Unemployed. Scared.

And because out of work Americans are keeping their billfolds in the pockets of their pants, the workers who make the pants aren’t faring well either.

Children are going back to work in Cambodia. (via Phnom Penh Post):

Speaking at the launch of a national workshop investigating the impact of the global economic crisis on child labour, (Bill) Salter (Director of ILOs subregional office in East Asia) said the ongoing decline in garment exports would have a profound impact. Garment industry analysts suggest that more than 70,000 workers have been laid off since the crisis began, Salter said. At least 100,000 more jobs are expected to come under threat over the next two years.

As family incomes continue to dwindle, more parents will resort to sending their children to work in order to earn enough money for food and other basic necessities – to the detriment of the children’s health, nutrition and intellectual development, he warned.

Much of the world is experiencing decline in exports. A look at Nepal’s garment exports (via My Republica): 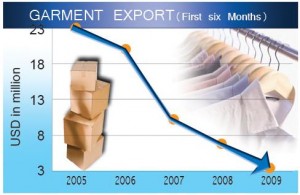 We work for food, for clothing, for respect, for our children’s education, for pride, for love and money, iPhones and TVs, for ourselves and others, for richer and poorer, until death or pink slip or factory closure do we depart.

In the West, we are more than our jobs. We are more than titles. At a time when our jobs are letting us down, it’s important that we don’t let ourselves down. This Great Recession is a time for us to strengthen our relationships with one another, to remember that we should measure life not in hours or dollars, but in smiles and laughs. I’m an author but more importantly I’m Annie’s husband, Harper’s dad, Lynne and Ken’s son, Kyle’s Brother, Jared and Cale’s uncle, and so on.

For those in the developed world, losing a job may mean a lifestyle change, but in places like Bangladesh, Nepal, and Cambodia making a living quite literally means sustaining life. There are few social safety nets, if any. Without a job you might not have the ability to feed your child, to care for your ailing parents, to keep illness, disease, and death at bay.

On this Labor Day, let’s work to reflect less on the labor and more on the laborer. Because as much as we need jobs, we need each other much more.

“as much as we need jobs, we need each other much more”

Right on! Thanks, Kelsey.

@KelseyTimmerman
says:
In Patagonia getting my hands dirty farming. This place is amazing. You can drink the water right from the lake. Am… https://t.co/bbUa9pLJ28
16 hours ago | FOLLOW ME! | RETWEET